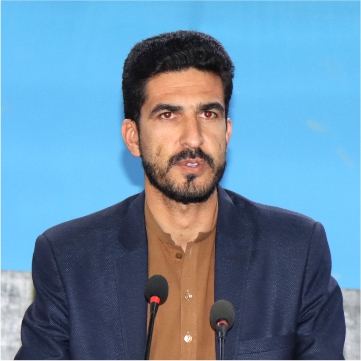 Mr. Rezwanullah Siddiqi son of Ghulam Dastageer, who is the resident of Laghman province, Alingar District and Kanda village. He was born in 04/1361 in a very pious spiritual and religious family.

His father and grandfather were Islamic dominated people in the society. His whole family was more helpful to the poor villagers than any other families in the area.

When he was seven year old, he was admitted to a school in his village and completed his primary education there. Then, he joined Muhammad Hussain higher secondary school in Laghman province and graduated with excellent grades. After that, he traveled to a neighboring country Pakistan, KPK Peshawar. He got higher Islamic education at Imdadul-Ulom religious Institute in 2004.

He also studied at Preston University in Pakistan, Faculty of Economics and achieved BA degree in Economics from that University in 2008. While he was studying at schools, colleges, institutes and universities, he proved himself that he was the most excellent and diligent student in his all-academic periods.

After his graduation from various important academic professions, he got the first job as the General Administrator in the Public Health (hospital) of Laghman province in the governmental structure relevant to the Ministry of Public Health in 2008.

There, he worked as General Administrator of Medical International in 2009.

As he was very successful personality, he was also selected as the Provincial Responsible for UN woman violence unit ORCD in 2010.

He recruited as General Administrator of Health unit TPO in 2011. As well as, he worked for Swedish community in 2012.

He was selected as General administrator of Mili Institute of Higher Education by the university leadership and served here from 2013 to 2019.

As he was very honest and hard-working man at Mili Institute of Higher Education, he was promoted step by step. Therefore, he has been selected as vice chancellor for administration and finance since 2019 to the present.

Actually, the above respectable personality was very active and successful in his scope of work. He was also praised and appreciated by the leadership of Mili University.

Going ahead in the 21st century is full of hardships. However, the people who light the candle of education and work hard can wisely combat these challenges and complex circumstances successfully. Fortunately, Afghan nation gradually gets suitable advancement in every field. It updates higher education now a days. In the result of the promotion, it throws out useless theories and formulas. Furthermore, the opportunities of higher education and the mental focus academic quality assurance are rapidly demanded. Also, it struggles to have positive competition with the other educational organizations on national, regional and international levels. Thus, it highly attempts to get to the top of the particular approaches and aims. Now a days our society faces many kinds of issues and problems, Therefore, I advise and convey my message to the young generation to pay their full attention to significant aspects of education and society requirements in order to pave the way and achieve all expected goals. As well as, they should use great methods of success in every field to be please the people and can help the residence of our beloved country Afghanistan.